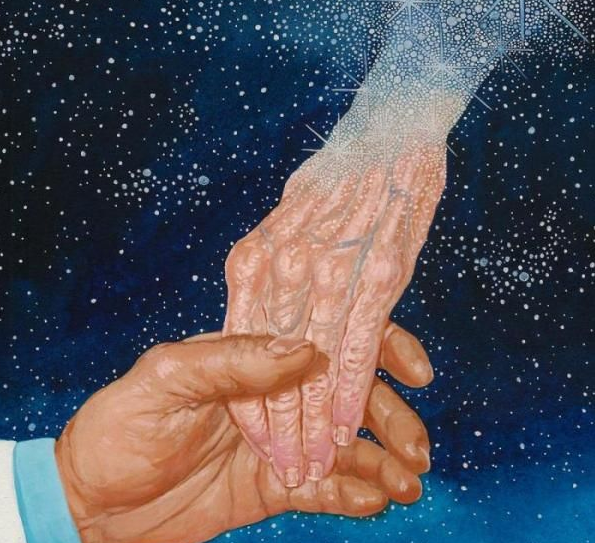 I Was Not His

He lay there in that flowered room

…I was not his

But I sat in the Hospice room

And watched over him…

Because he was mine.

I sat and saw in my mind’s eye

The days he came home from work,

Panting and hurried…but cracking my door with a smile–

The only few moments he had from lunch  he had come

To bring me a comic book when I was sick….

Although I was not his.

I sat an saw in my heart’s eye

Being able to do that comes with being adopted–

And I saw I hurt him, this man who showed no weakness

…because, that day, he thought I was not his.

And I saw in my soul’s unblinking and unfiltered eye

What was left of this man…at that moment;

Pale, and drawn and in agony…

At the end of a journey..

giving a lifetime of toil, and love, and frustration, and wonder

Who was not his.

We said goodbye silently that night.

His worn-out and war-torn body and spirit gave way

And he was released to peace and the embrace of eternity….

And I wept, and screamed, and knotted myself into tangles of grief…

Because, I was not his….and always wanted to be.

He never said those words though;

He always said I was the son he wanted;

That I was it for him;

And he played with me…

And he nurtured me…

And taught me how to love another person…

And gave me his soul—

Even though; I was not his.