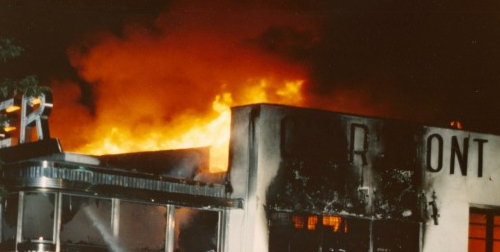 He got up from his resting place, got dressed as best he could manage as laundry day had NOT happened yet and would be talking to the help about that. After all those two boys, Slack and Drag, were supposed to keep things in order while he was engaged….they had been REALLY of lately and would need a good wake-up call.

He staggered, a little, as it was early; and stepped on the down staircase that led to the Diner of his mind to find the front and sides blackened, stained, and dripping with an oily substance that smelled of dead spiders and old rat droppings. He could see that the doors were ajar, one still on only one hinge, but he could get in there so in he went.

DeIDre was their, on her knees, with a bucket of water and a sponge; her ponderous figure looking smaller for once; as if she had shrunken after the attack. “We’re closed for now Love”, she said; scrubbing the ashen and, now, ebon, floor–the oily mess just spreading around as she cleaned…it was not coming up.

:I know, ma’am” he said. He realized instantly that his utterance of respect was a first, but, he thought to himself, “she deserves that at least:.

He offered to get down and help or try and clean off the muck from the counters and booths (especially his number 6 booth) , but DeIDre responded, saying; “I have to this alone, Love, it’s the way it has to be”. “However, she said, you CAN go down and see about that lot”, she said, pointing down to a booth that was still intact. A man was sitting there, shoulders hunched, unkept…and wearing a blue cape.

He, reluctantly, at first, strated walking down the Diner’s floor until he got to booth number 2; and he knew before he even got there who this was. He couldn’t believe his eyes….he actually rubbed them.

The figure was a very large, muscular man who wore a tight, yellow spandex-style uniform with a red belt and gloves and boots, and a cape of blue–it had seen better days. “As have you my friend”, he said to himself. He knew who this was immediately ; It was there on his chest for crying out loud..two huge, golden letters, “NC” surrounded by a golden shield. it was Neo-Commander; his hero since childhood; his idol that he always knew would be there to save the day…his favorite of all heroes.

Only Neo -Commander looked very much worse for wear His uniform was frayed and torn. His cape, detached on one side, his face unshaven, his hair and general appearance was as a man who has walked through a slum and absorbed it’s desperation and grief. He was crying as well….and that, in itself, was a very bad sign.

He asked Neo-Commander, “Sir, what happened? Why are you like this? You’re a hero! You save the day ALL the time! What are you doing here in this joint?” Ne-Commander looked up at him, eyes swollen and red from crying…he ut his arm out to catch the customer and took his arm and said “DON’T CALL ME THAT AGAIN!”…”They just call me “NC” now…or “Antsy”…I lost my self somewhere in the black smoke…”, and he lowered his head.

The customer sat down across from him. H wasn’t afraid to hold those gloved hands. He had dreamt of this as a child after all,; meeting his hero. He took “Antsy”‘s hands and notice immediately they were shaking; as his whole body seemed to be, and he said “It’s going to be fine…what happened?”

“Antsy” replied, “I saw the Diner under attack and immediately flew to save it..after all, it’s the enter of us all isn’t it?…It must be kept safe”..”He trailed off–“and the Blackness swallowed me; just for a few seconds…and I was pulled apart”, he said.

The customer felt “Antsy”‘s hands begin to shake more and he said to him; “let me get you something..it’ll help you feel better”. He went back to DeiDre and said, “I know you’re busting your ass, but is there any coffee or any cake left from the attack?”. “WHAT ARE YOU ON ABOUT?” shrieked DeIDre, cigarette ash even longer but refusing to drop –still..” “CAN’T YOU SEE I’VE GOT A MESS HERE?!”, she shouted.

She collected herself, straightened her white unifrorm, now stained with patches of black, and stood to her feet. “I guess I could use a break..and he, ” she said, “could use SOMETHING…I feel bad for him; he tried so hard to be brave.”

She wen to the cracked and broken counter and managed to find a piece of Angel Food cake and some of the butter coffee they always seemed to have and placed it on the mirror tray. “Don’t let him look too long at himself, Love”, she said quietly; “He’s had enough for awhile..although I do wish he would stop shaking so much; it’s causing tremors for Christ’s sake”.

And it was. It was if the DIner was slowly vibrating, even undulating, as “Antsy” as he was now called instaed of “NC” which he deserved, was shaking so violently seemingly from nervousness and anxiety. “Having one’s identity torn away must be aginizing”, he said as he approached the fallen hero.

“Here uo got, take…” but his words were suddenly interrupted by another huge crash into the walls of the Diner. The lights went out again and they all stood to their feet, including “Antsy” , shaking and terrified; to see Blackness covering the windows and doors and to begin seeping in to the cracks it had made the day before….

“III TOOOLLD YOOUU ALLL..THIS IS MIIINE..I WOULD RRTTURNNN….You will all DIE this TIME, and THIS PLACE SHALL BE MINE TO COMSUME….” The Blackness, as “Antsy” had called it, boomed.

DeIDre, stood steady with her mo and sponge covered in muck and said–in a voice, still and resolute ad the grave…”Come and take it then you bastard, you…If you CAN” “I’ve got BACKUP this time”,and she turned to look at “Antsy”,who shrank back into the jukebox.

“No, you’re never powerless, Love” in that gravestone voice–she seemed to calm him. She now said. “Put your hands together, hold them in front of you and let that shaking get out of control..put ALL you power and nerves behind it..and I mean, NOW!” she yelled. Nervously, and with hesitation he clasped his gloved hands together and pointed the at the door, which was now, once again, covered with muck and smoke and those two, red fiery eyes…

“Antsy”‘s hands began to shake. Slowly, at first, and then, faster and faster and more violently; until the entire Diner was vibrating like a ship at sea in a gale…the Blackness seemed to scream with a sound like rushing, black water; “like the giant squid in that old Disney movie “, he thought– and withdrew it’s hold from the Diner and slunk back, again, to where it dwelt in his mind.

DeIDre turned, and slowly, a small smile came to her face. “You see Love, you are NEVER powerless…you just have to try something new.”she sais. “You have to find your way again..on a new path”. It was the first time he had heard her say anything remotely nice to anyone. He was stunned.

“Now, Dearie”–she said, “Take yourself a look in the mirror…go ahead.”

“Antsy” went to booth number 2 and looked into the tray, past the Angel Food cake–and saw his true self for the for time in days. Strong, resolute, but still shaky and nervous in a way he now understood. Life was heroic at times, and one can be a hero; but one can also lose themselves in the process. Neo-Commander now knew what he had to do; and as he stood again to his feet after gazing into the mirror; he found himself restored, just a little to his former self. Cape still dangling and uniform a but less torn and faded, he looked better.

He turned to the customer and placed his hand on his shoulder. “Thank you, friend” he said…you’re my hero now. He turned and headed for the door. As he passed DeIDre, he triedn to embrace her but she was NOT having it..”GET OUT THERE AND DO UOUR JOB! GET AFTER THE BLACKNESS!”, she screamed, alomst as if she was pleading….”GO!!”

Neo-commander put out his chest, as he had done so often before, strode to the door and, taking a deep breath; jumped back into the sky where he belonged.

The customer went to DeIdre and said, “How long until it’s back?”, he said . DeIDre looked at him…”probably tomrrow…”she sighed. She looked even more shrunken and tired than before. “It’s Ok though…”she said to him, “I’ve got the team now–let him come…we’ll be ready. I just need to make a few calls”..and she, to his utter astonishment, put her hand on his shoulder and said, “You’re the first one”. “You must be here with us”…she meant that.

“I will”, he said and stiffened…”count on that”. She smiled again, a mall simile. “Oh, and bring that damn dog too; we will need him”…”What dog?” he said to her. “You know, the one that stays by the guy who askes for spare dreams on the staircase. He’s been gone for awhile but he’s back…and they need to be here”

“Understood.”, he said although hejad know idea why. “Now, off you go”, she said “I’ve got this mess to deal with”. And, with that, went back to her cleaning.

He turned and headed back upstairs his dwelling. ALong the way, he saw the dream beggar. “Got a spare dream Mister?, he said. “Not right now…but I’ll have one for you soon”..and he turned to look at the huge, grey mastiff sitting next to the beggar. “He’s huge! What’s his name? he said.